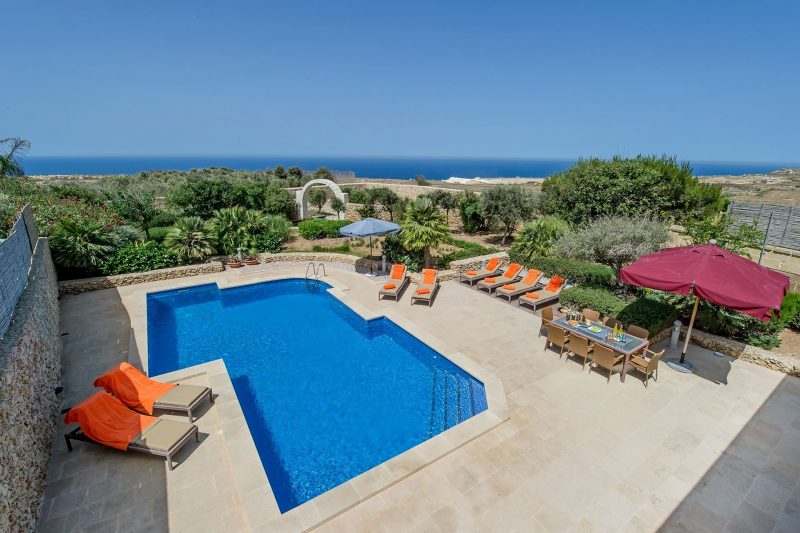 Gozo is a megalithic paradise and not just for the most famous tourist locations such as the UNESCO World Heritage site of Ġgantija. For hikers or more casual walkers, there are a lot of Neolithic wonders sitting quietly, without signposts, in the countryside.

The Ta’ Blankas olive grove in Xewkija is a beautiful public garden for picnics, walking, and nature. What few people realize is it’s also home to a dolmen. These rather unusual megalithic structures can be found all over the world. Around forty per cent of global dolmens are in South Korea. They are made up of a huge horizontal megalith sitting on two smaller stones, forming a sort of flat arch similar to the entranceways of the Maltese temples. Why ancient people would go to such tremendous lengths to erect these monuments is a mystery. It’s thought they were for burials or cremation urns but the finds rarely support that theory. They might be Bronze Age or Neolithic but what’s certain is that they are prehistoric and must have been important to the ancestors. Dolmens vary in size, shape, and design and sit within varied landscapes.

The Ta’ Blankas dolmen is on the northwest corner of the olive grove and is relatively small compared to others on the islands. It’s in direct alignment with the dolmens which look out from the edge of the  Ta’ Ċenċ cliffs to the south. What’s even more intriguing is it looks as though a megalithic stone avenue once led up to it. In the 17th century, remains of what’s thought to have been a Neolithic temple were also found close to Ta’ Blankas, next to the area that the church was built on. Unfortunately, these didn’t survive.

Leaving Xewkija and moving on to Għajnsielem, there are two groups of megaliths that are not well known. They are on private land but can be seen from the road. The first group makes up what is known as the Borġ Għarib temple and is thought to be the remnants of a large megalithic structure. They are just north of the road of the same name and consist of two slightly curving walls which are easily reminiscent of the apses making up the more intact ancient temples. To the south of the Borġ Għarib temple is the L-Imrejżbiet stone circle. It’s not a full circle but certainly looks as though it once was. Stone circles are not common on the Maltese islands. In fact, there’s only one and it’s the megalithic ground-level entrance to the Xagħra Stone Circle, that wonderfully famous necropolis, the finds from which can be viewed at the Ġgantija Interpretation Centre. Although some Neolithic remains are little more than a few scattered megaliths, taking time to explore them and the surrounding areas helps to build up a picture of this ancient landscape during a time when ritual activity seems to have been at its peak.

Continuing up the road to Qala, a solitary menhir can be seen surrounded by houses. It’s possible it once belonged a larger building but nothing is certain. Close to the dolmens on the Ta’ Ċenċ Cliffs is an incredibly ruinous site referred to as the Borġ l-Imramma temple. Only a few megaliths look anything like the ones seen at other temple complexes so it’s hard to envisage what its original size and shape would have been. Like Ġgantija it would have had incredible views over the surrounding countryside. The  Ta’ Ċenċ Cliffs are an awesome place to visit, not just because of beautiful sunrise views and a good amount of land for a lengthy walk, but also because of the history.

As well as dolmens and the remains of a temple, there are some well-preserved examples of the infamous and mysterious ‘cart ruts.’ Although they exist in other countries as well, the Maltese islands are absolutely littered with these parallel tracks cut into the bedrock, normally having a gauge of 1.41m. They are called ‘cart ruts’ because it’s thought they were worn by an ancient vehicle or carved out specifically to carry them. However, no one theory satisfies all of the characteristics of these grooves. Some are shallow, others are deep. Some run off cliffs, others go underwater. Some are straight, others are curved. Their age is debatable but they are most likely prehistoric.

Returning to the Ta’ Blankas olive grove there are also some fantastic examples of ‘cart ruts’ there. One set is double-rutted and very deep with the other, 150m to the north, much more shallow. The prehistory of Gozo is full of mystery and monuments. Visiting the remains of this fascinating period is a great way to collect clues and piece together your own theories about the ancient past.

Intrigued to learn more? Check out these articles from Laura the Megalith Hunter on Gozo In The House